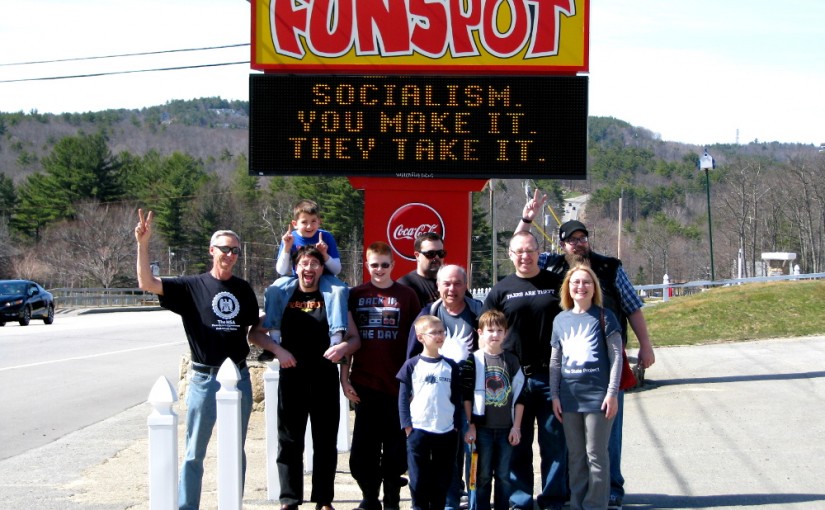 Have you ever thought about what it would be like to invite the entire NH liberty movement to Funspot – the largest arcade in the world – and play video games, indoor mini golf, bowl, darts, pool, bingo, drink, eat and have fun for hours? It was a blast! LibertySpot 2015 was a great success, and we’re doing it again.

Mark your calendar April 16, 2016! We’ll start with our regular Lakes Region Porcupines meeting at the New Hong Kong Buffet at noon and then move on to Funspot from 2:00 until 11:45!

It turns out, the founder/owner of Funspot, 85-year old Bob Lawton, is a big fan of liberty and his favorite book is Ayn Rand’s Atlas Shrugged! When Funspot turned on their new digital sign in the 1980’s, the first message Bob put on it was “Who is John Galt?” Did you know Bob was the State Rep who sponsored the bill to put “Live Free or Die” on our license plates?

To make this day even more epic, everybody’s encouraged to wear their favorite liberty gear! Wear an FSP tshirt, an NHLA polo, a Mises bracelet, a Ron Paul hat, a gun rights tshirt, whatever you want! You’ll be surrounded by fans of liberty!

Bingo starts at 6:45pm in the building next door to Funspot. The D.A. Long Tavern, the bar inside Funspot, opens at 1pm on Saturday (only ages 21 and up can enter the Tavern and drinks must stay in the Tavern).

With a big space and lots going on, let’s gather out at the marquee for a group photo hourly from 3:00 to 6:00. Which do you prefer, ‘Who is John Galt?’, or ‘A government big enough to give you everything you want…’?

Come out and have fun with other NH liberty activists! Join and share our event! See ya there!

Thank you Vince Perfetto (101 Reasons Film) for creating a great day and getting the ball rolling in 2015!